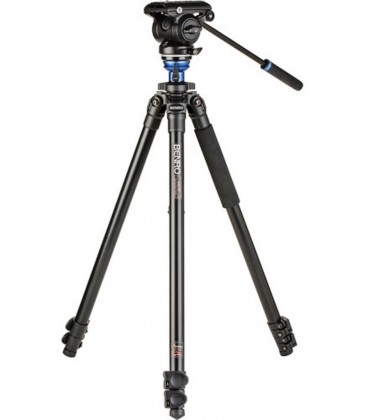 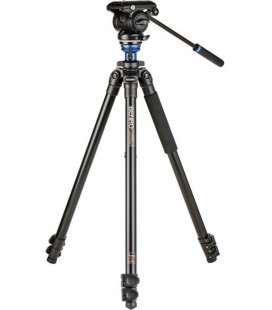 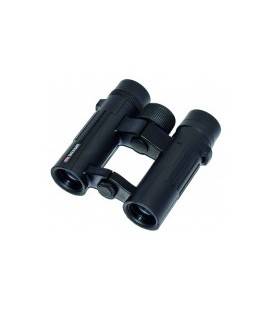 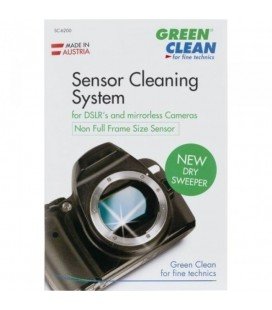 Benro's A2573F Aluminum Single Tube Tripod with S4Pro Fluid Video Head supports loads of up to 8.8 pounds and can be transported quite easily thanks to its compact and lightweight design. Plus, with the head with a 60mm flat base and a 3/8 "-16 threaded hole, it can be removed from the tripod and efficiently mounted directly to sliders, jibs, and other support gear. Overall, you get a versatile system with a single-tube legs that fold carefully.

The S4Pro head is natively set to 1 step of counterweight. With the push of a button on the side of the head, an extra step is added for a total of 2 steps. Next to that button is a release switch that takes you back to 1 step. There is no zero setting. The head features a fixed pan and tilt drive and has independent pan and tilt locks. The tilt range is + 90 / -75 ° and the swivel range is a full 360 °.

Some parts of the head are made of magnesium and other parts of aluminum. Virtually the entire head, including its knobs, is made of sturdy yet lightweight metal. A bread stick is included that can be attached to a rosette adapter on the left or right side of the head, for right- or left-handed users. A camera plate is included that can be adjusted forward / backward to allow you to find the optimal balance for your camera. A safety lock on the plate ensures that once mounted, the plate will not come off if you move it too far in either direction. Two camera screws (1/4 "-20 and 3/8" -16) are supplied that can be stored under the camera plate in the head itself, in dedicated slots. For attaching accessories, there is a 1/4 "-20 threaded hole on each side of the head to which you can secure the link arms.

The A2573F is a 2-stage / 3-section tripod with a flat base center column. With the head attached, the tripod reaches a maximum height of 70 "with the column fully extended. With the column retracted, it is approximately 63" maximum. The minimum height is 16.3 ", which is an advantageous low height that is not common among most tripods. At this height, you can set up the tripod for low-angle time-lapse shots and other applications. Each leg The tripod is independently adjustable into three positions. Being able to snap the legs into one of these three positions will allow you to set up quickly and efficiently. To make things even more efficient, the center column has a leveling adapter so that You can adjust the position of the fluid head without having to adjust the tripod legs. The center column also has a weight hook for sandbags and other loads that you can hang for additional stability. The A2573F tripod features rubber feet and with picks for use on virtually all types of surfaces.
S4Pro fluid head
8.8 lb payload
60mm flat base with 3/8 "-16 thread
Compatible with 60mm flat-base tripods and can be mounted directly to most sliders, jibs, and monopods
1-2 steps of counterweight
Fixed pan and tilt drag
Independent pan and tilt locks
+ 90 / -75 ° tilt range
360 ° swivel range
Made of magnesium and aluminum.
Rosette adapters on the left and right side to attach the included pan bar
Sliding camera plate with safety lock
1/4 "-20 and 3/8" -16 camera screws included and can be stored in dedicated spaces on top of the head, under the camera plate
Two 1/4 "-20 tapped holes for accessories
A2573F Tripod
70 "maximum height with S4Pro installed and center column extended
Low angle minimum height of 16.3 "
Single tube legs independently adjustable in three positions
Leveling adapter at the end of the center column
Rubber feet and spikes
Flip leg locks
Aluminum construction