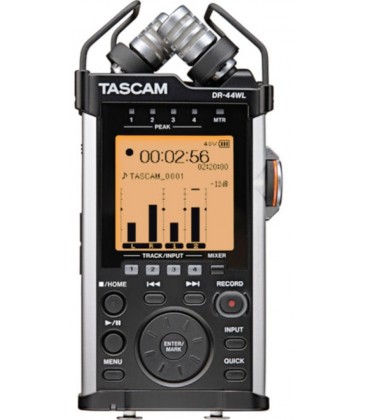 Discount of 33 EUROS for Canary Islands

Discount of 33 EUROS for Canary Islands

The DR-44WL portable audio recorder with Tascam Wi-Fi, which allows you to record 4 audio tracks simultaneously while providing Wi-Fi enabled file transport and sharing control, features a built-in XY stereo microphone and inputs Dual XLR Combo. Able to track in resolution up to 24 bits/96 kHz. Thanks to its integrated Wi-Fi, which does not require an external network, it can control all the functions of transport through a free application for IOS and Android. In addition, you can use the built-in Wi-Fi to transmit playback to your mobile device, as well as transfer files directly to your smart device or computer, to quickly load them into social networks.
The recorder features dual-level recording, which records duplicate tracks at a lower volume, to create a low-level security track. It is also compatible with dual-format recording, which simultaneously tracks as WAV and MP3 files, so it has access to smaller file sizes to share, while maintaining the highest quality WAV as the main track. The DR-44WL records on SD cards, but includes a MicroSD card adapter for additional recording options. Also included is a windshield, a microphone handle, a shoe adapter, a 4GB MicroSD card, an AC adapter, 4 AA batteries, a USB cable and a carrying case.
High quality condenser Microphones
A pair of studio quality condenser microphones Surpass DR-44WL, arranged in a true XY pattern to obtain detailed images and phase coherence. The microphone capsules are designed to withstand up to 132 DB SPL, as strong as a jet plane, without distortion. Record concerts and essays with the confidence that your recording will not be distorted.
In addition to the new high-sounding capsules, a damping system has been developed to reduce noise and noise. The capsules are suspended in a rubber mount that avoids low-frequency noise when carried in the hand, mounted in a camera or used on a tripod.
Dual-level recording function helps prevent overload

If the levels are so high that your track is distorted, the recording cannot be saved with any type of mastering. DR-44WL includes a limiter to keep levels under control, but an even more effective system is the dual-level recording function. Dual-level recording is a function that resolves this problem by simultaneously recording two stereo files at different levels. If your recording is distorted, you have a lower-level "security track" that will not be distorted. Note that when the dual-level recording feature is enabled, a maximum of two stereo tracks can be recorded simultaneously
XLR Combo Jacks
The external XLR/TRS input jacks accept microphone or line-level sources. Balanced or unbalanced signals can be connected, either at + 4 or-10 levels, using the lock XLR Connector or the 1/4 "connector. The DR-44WL supplies 48v Phantom power for condenser microphones that require it. Both internal microphones and external inputs are used during 4-channel recording, for live recording
Microphone preamplifier and A/D conversion
A programmable gain amplifier (PGA) is used to adjust the level of the audio inputs. On many devices, the level of the audio codec is set to control levels. In DR-44WL, the mic gain circuit is independent of the A/D converter for low noise performance as well as a programmable gain (manual, automatic or controlled via Wi-Fi).
CIRRUS LOGIC CS42L52 is used in DR-44WL. The A/D-d/a chip features excellent audio performance and low power consumption for longer battery life. Built-in microphones and external inputs pass through this low-noise audio input circuit.
4-Track Recording mode
The DR-44WL can record internal microphones and external inputs simultaneously for a 4-track recording. Use the microphones to capture the sound in the room while recording a mix of the PA mixer board. Other 4-channel applications include battery recording, surround recording and film production
Wi-Fi Remote Control
DR-44WL creates his own Wi-Fi network with his iOS or Android phone, and a free application called control control of Dr controls the remote operation without touching the unit. The application allows you to start and stop recording, and can be used to verify and adjust input levels. Any of the recording controls on the DR-44WL can be controlled via Wi-Fi.
The Wi-Fi transmission range is approximately 65 feet (20 m), far beyond the range of infrared remote controls, so the recorder can be placed where the recording sounds best. The DR-44WL audio can also be transmitted via Wi-Fi to verify the recording. Connect the headphones to your smartphone and listen to an almost real-time signal from the recorder
Simple Wi-Fi connections without router
DR-44WL connects directly to smartphones and other Wi-Fi devices. There is no need for a Wi-Fi router network or other external equipment. Wi-Fi connections can be set by simply entering the information shown in the application. The connection status can be verified with a LED on the unit as well as the application screen. Even if the Wi-Fi connection is interrupted, the recording will not stop
Remote control using the free application of control DR
The free DR control application allows your phone with IOS or Android to control the recorder from any place in the room. Start recording on the stage or from the back of the room, while placing the DR-44WL where the microphones sound best. The remote start also eliminates driving noise by pressing a button or moving the recorder.

Peak reduction and limiter
These functions automatically adjust the recording level in response to the input level. The peak-reduction function automatically lowers the level if an input overload is detected, optimizing the recorded sound. Limiter reduces excessive input levels without changing input-level settings
Automatic track creation per hour
The DR-44WL can automatically create a new file and continue recording without interruption when a certain time has elapsed. This function can be used when recording for long periods of time. For example, when set to 5 minutes, a new file will automatically be created every 5 minutes when you record. These files can be combined later in your audio editing software for perfect playback. Manual file increment is also possible by pressing the record button during recording
Automatic track creation by level
DR-44WL can create a new track each time a level threshold is passed. This can divide a concert recording into tracks, and it can be useful when scanning another recording like a cassette, DAT or a vinyl disc.
Auto-dial function
Marks can be added to files when high levels or peaks are detected. When set to a level, the marks can be automatically added to the points when the songs end. When configured for peak detection and used in conjunction with the peak-reduction feature, these marks will identify the points where peaks were detected, making it easier to use audio editing software on a computer. You can also add bookmarks manually while recording
Split file
This function can split files where you add markups. When used in conjunction with the Auto-dial feature, long recordings can be automatically split into files with individual songs. Files can also be manually split
MTR mode
The MTR mode allows for separate multitrack recording on four tracks. Record using the built-in microphones to capture song ideas anywhere. Then plug it into the external inputs to add AMP simulator and keyboard overshoots. Use the + 48v Phantom power mic inputs to bring condenser microphones for vocal recording. When you have finished recording your song, use the built-in mixer and reverb to mix, then record your mix as a stereo file
Internal Reverb effect
You can add a stereo reverb effect from the internal mixer. Preset settings for rooms, rooms, and other standard environments can be used to suit the user and the type of music. This effect can be applied during recording and playback to give your recordings a sense of space
Speed change function (VSA) to adjust the speed from 0.5 to 2.0 times (in 0.1 increments)
AB Loop play function for music rehearsal.
Auto-splitting function that divides files into markups (manual splitting is also possible)
Ms Decoding function to use MS Microphones
Built-in monaural speaker with 0.3 W output
Large Size LCD screen 128 × 128 pixels