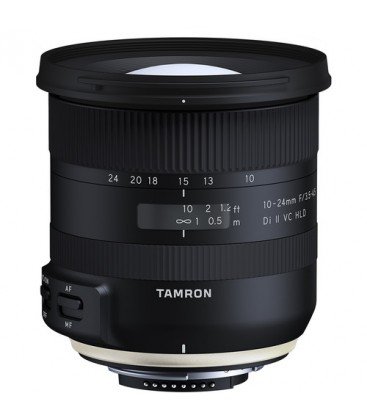 The new B023 has a focal length range ranging from 10 to 24mm, the widest range between ultra-wide-angle zooms for DSLR cameras with APS-C sensor. The equivalent in a 35mm sensor would be a wide angle covering focal lengths from 16mm ultra-wide-angle to 37mm semi-wide-angle. Enjoy different wide-angle captures with a single lens, from dynamic landscapes far beyond human peripheral vision to simple or casual shots.

Responding to the request of many users who expected a wide angle with image stabilizer, we have equipped this new model with Tamron's famous VC (Vibration Compensation) image stabilizer. By optimizing its engine and control algorithm, it has been possible to incorporate the VC while respecting the compact design of the predecessor model, the B001. The VC is a great help for any photographer who takes pictures in low light situations such as poorly lit interiors, at dusk or without a tripod, etc. The mechanism proves to be especially effective when slow exposure times are used.

4. The first lens equipped with the new HLD engine - power and stability

The new HLD torque regulation motor is the one that focuses the B023's system when in AF mode, its power and stability makes it adjust the image in a smooth and controlled way and providing good image quality even at the longest distances. It is possible to act on the focus even when working in automatic mode, the "Full-time Manual Focus override" allows you to make small manual focus adjustments instantly and without having to change the mode.

Not being enough to improve image quality, Tamron adds new functions and substantially adjusts all the features of its predecessor, the intelligent design of the B023 applies an optimal configuration so that components such as the image stabilizer and the autofocus unit fit within an even smaller lens than its predecessor. Thus, this small achievement of optical engineering, demonstrates an excellent balance and functionality suitable to accompany light camera bodies everywhere.

6. Fluorine coating and a robust seal against dust and moisture to carry everywhere

The front lens has a fluoride coating that repels water and grease, protecting the lens against fingerprints, dirt and dust. The lens surface is easier to clean and less vulnerable, and the lens is sealed in the most critical locations, ensuring maximum protection for all outdoor and action shots.

The electromagnetic diaphragm used as standard for Canon-mount lenses now also operates on Nikon*2-mount versions. This ensures more precise control of the aperture thanks to a motor that opens and closes the diaphragm leaves through electro-magnetic pulses.

8. Compatible with the TAMRON TAP-in ConsoleTM

The TAP-in Console is an optional accessory that connects through a USB port to your PC and allows you to update the firmware of your target or modify parameters of the AF or VC image stabilizer easily and immediately.

Heir to the ergonomic curve design, delicate polishing and all the fine details that characterise the SP lens series, the sophisticated design of the new B023 also attaches importance to functionality and simple handling. In all its form - including the fine gold ring (characteristic of Tamron), the contour of the buttons and the window with the distance measuring scale - it is true to the internal values of the lens.

Specifications, appearance, functionality, etc., are subject to change without notice.

* The length is the distance from the front of the lens to the rear face of the frame.