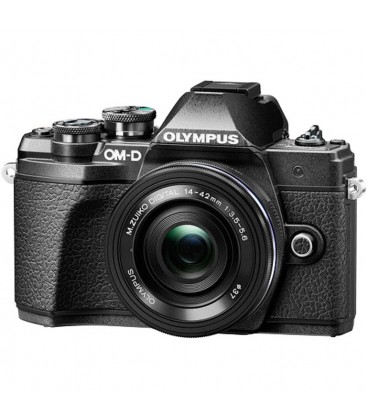 Discount of 65 EUROS for Canary Islands

By buying this product you can collect up to 7 loyalty points. Your cart will total 7 points that can be converted into a voucher of 7,00€. For every 100€ of purchase you get 1 point = 1€. The vouchers represent a discount of up to 10% of the amount of the cart.

Compact, lightweight and better than ever, the OM-D E-M10 Mark III Black from Olympus takes its place as an extremely capable entry-level option for shooters who They are looking for a Micro Four thirds camera without SLR-style mirror. This version is included with the compact lens M. Zuiko Digital ED 14-42 mm f/3.5-5.6 EZ, which provides a zoom range equivalent to 28-84 mm versatile to capture a variety of topics. Plus, this kit comes with a 16GB SDHC memory card and a camera case, pretty much everything you need to get out and start shooting.
This iteration incorporates a four-meter Live Four thirds sensor from 16.1 MP and the TruePic VIII dual-core image processor, allowing a variety of fast and powerful features, including video recording up to 4k UHD. The camera retains its intuitive and robust construction, which benefits from many physical controls, as well as a 3.0 "LCD touch screen and an 2.36 m electronic viewfinder with an enhanced 1.23 x magnification. In addition, several other features have been implemented to make more fun shots, such as 15 Art filters and a Video Mode clip that allows you to quickly make videos on the camera.
The E-M10 Mark III has many capacities to improve the overall quality of the image. The most important of these is the inclusion of a robust image stabilization system in the 5-axis body that can compensate for approximately 4 shutter speed stops. Together with this, a 121-point enhanced contrast detection AF system will help you block, track, and capture photos of your subjects with great clarity. The speed has also been improved with a continuous shot of up to 8.6 fps and a sensitivity range of up to ISO 25600. The Mark III features an electronic shutter function for even faster shutter speeds and silent shots. Beyond this, the camera, of course, has built-in Wi-Fi, this time with a QR code function for even faster setup.
16.1 MP Live MOS Sensor and image Processor TruePic VIII
To create high-resolution images, the OM-D E-M10 Mark III is blessed with a 16.1 MP Live MOS Four Thirds sensor and the four dual core TruePic VIII Image processor, a combination designed to maximize speed and quality. It helps users to create crisp photos and videos in a wide range of situations with sensitivities ranging from ISO 200-25600, and can be extended to ISO 100-25600. It also provides an electronic shutter function for faster shutter speeds and a completely quiet operation, and can record 12-bit uncompressed raw image files.
UHD 4k video recording
The additional processing power of the TruePic VIII provides the E-M10 Mark III with greater video capacity in addition to still images, allowing the creation of high resolution UHD 4k video up to 30p. Users can enjoy a high bit rate of 102 Mbps for Crisp, detailed images and options for NTSC and PAL frame rates. Full HD and HD recording offers faster speed with full HD options for up to 60p and high-speed HD 720p to up to 120 fps.
In addition to video recording, Time-lapse movie mode is also available to record up to 4k UHD resolution with a 5 FPS shooting speed to highlight subject or movement changes over a longer period of time. Full HD and HD time-lapse configurations are also available. In addition, there is a video clip mode present for video creation on the camera, including the ability to use the audio transferred to your SD card.

5-axis image stabilization within the body
Image stabilization in the body by changing sensor helps minimize the appearance of camera shakes up to 4 stops with any lens in use and compensates for camera movements that are especially noticeable when working with shots from Telephoto, macro images and prolonged exposures. In addition, this unique image stabilization system works on five axes to compensate for vertical angle rotation, horizontal angle rotation, horizontal displacement, vertical displacement and motion movement of the camera. This range of detected movements serves to benefit the traditional shooting of still images, as well as the recording of films and work with moving subjects more effectively. In addition, image stabilization can also be used when framing shots, for more precise compositions, by pressing the push button halfway.
121-point contrast detection AF system and shot at 8.5 fps
Quickly and efficiently block and track the matter to ensure crisp images by using the AF system with high-speed image sensor with 121-point contrast detection of the E-M10 Mark III. Users can also access the Touch AF functions through the rear LCD screen and benefit from excellent tracking performance. In addition, the E-M10 III can shoot at speeds up to 8.5 fps with the ability to record bursts of up to 22 raw frames or 36 jpegs. A low-speed 4.8 fps configuration is available without buffer limit.
Built-in body design and Wi-Fi
The durable body has two dials, a directional pad and a shortcut button for quick and intuitive control.
The built-in Wi-Fi is available for direct connection to a smart device and you can access a QR code configuration for faster connection and configuration.
The 3.0 "1.04 m-dot LCD touch screen can be tilted down 45 ° and up 85 ° for use at odd angles.
The touch control provides direct access to several functions: Shutter trigger, AF area selection, AF area size adjustment, AF touch Panel, frame forward/backward, extended playback, Live Guide, Super Control Panel, art filter, Wi-Fi connection, video controls, video effects, video teleconverter, and timer.
For eye-level visualization, a EVF of 2.36 m points is available, which has an improved increase of 1, 23x for convenience during use.
A mechanical shutter with a range of 1/4000 to 60 seconds is present along with a silent electronic shutter function with a range of 1/16000 to 30 seconds.
Built-in Flash with guide number 19 ' to ISO 100 to illuminate dark scenes.
An SD card slot is available with UHS-II media support.
External flash units can be used through the hot shoe.
Other camera features
Silent shutter mode eliminates shutter noise and other electronic sounds to benefit work in nature, concert halls or other sound-sensitive places.
Advanced Auto mode analyzes the scene and subject to select the best possible configuration.
Scene mode features several preset settings to optimize camera performance to your theme, including people, movement, interiors, night scenery, landscapes, close-ups and more.
Fifteen ART filters are available to add a special touch to your images, including a new Bleach Bypass option to provide a feeling of old film with a silvery and shiny feel in metallic textures.
Advanced photo Mode (AP) provides access to various creative modes, including live composite, live time, Panorama, HDR, silence, Keystone compensation, focus bracketing, multiple exposure, and AE bracketing.
Live Bulb and live Time configurations can be used to produce creative, long-exposure images. Live BULB allows you to keep the shutter open for up to a minute and live time allows you to press the shutter button once to open the shutter and then press again within one minute to end the exposure.